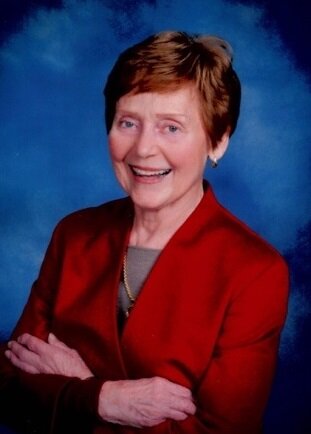 Please share a memory of Anita to include in a keepsake book for family and friends.
View Tribute Book

Robert and Anita started their family while he was in the Army station at Fort Bragg in North Carolina. After military service, they moved back to Lafayette in 1958 where Robert began a practice in general Dentistry for the next 51 years retiring in 2012.

One of Anita’s proudest accomplishments was raising nine children.  She was a dedicated wife and mother as well as an astute business professional and served as the corporate secretary for a number of family businesses.

Anita was a perfect life partner, trusting in God, in marriage, in business, in family, and in profession. She was an excellent seamstress, a gourmet cook, a family leader, and a professional healthcare provider.  Loved by all who knew her.

Donations can be sent to the Lafayette Diocesan Foundation c/o Roetker Family Endowment or the charity of your choice in lieu of flowers.

A Mass of Christian Burial will be celebrated at 11:00 am EDT Friday, October 14, 2022 at St. Mary of the Lake Catholic Church in Culver, Indiana.  Interment will follow at the Masonic Cemetery in Culver Indiana.  Online Tributes may be offered at www.frainmortuary.com.  Arrangements have been entrusted to Frain Mortuary in Winamac, IN.

To send flowers to the family or plant a tree in memory of Anita Roetker, please visit Tribute Store
Friday
14
October

Look inside to read what others have shared
Family and friends are coming together online to create a special keepsake. Every memory left on the online obituary will be automatically included in this book.
View Tribute Book
Share Your Memory of
Anita
Upload Your Memory View All Memories
Be the first to upload a memory!
Share A Memory
Send Flowers
Plant a Tree