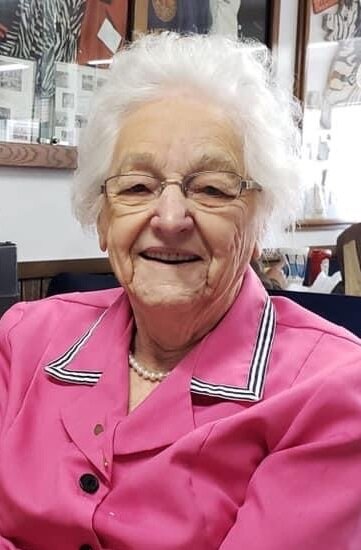 Obituary of Catherine A. Hahn

Please share a memory of Catherine to include in a keepsake book for family and friends.
View Tribute Book

Catherine A. [Winters] Hahn, 103, of Winamac, IN went home to be with the Lord on Thursday, August 11, 2022.  She passed away peacefully at the Pulaski Health Care Center in Winamac. Catherine was born on April 1, 1919 in rural Gilliam Township, Jasper County, Indiana to the late Ernest and Oscia [Cassidy] Winters.  She married her beloved husband, Dallas R. Hahn, on October 18, 1935 in St. Joseph, MI.

Catherine was a loving and devoted wife and mother who diligently worked by her husband’s side and saw to the raising and education of her four children.  Her husband, Dallas, was elected as Pulaski County Assessor in 1970, and Catherine served as his Chief Deputy.  After he passed away on November 13, 1976, Catherine was caucused in as Pulaski County Assessor.  She completed his term and was elected to two terms of her own.  She served the citizens of the county with a precise and friendly competency.

Catherine enjoyed gardening, canning, cooking, and baking.  She enjoyed gifting people with her baked goods and bringing candy to church for the children (to whom she was fondly known as the “candy lady”).  Catherine was humbled to be named Baking Queen of the Francesville Fall Festival in 2014.  She was a member of Tippecanoe Christian Church, Pulaski County Farm Bureau, Pulaski County Democrat Women, and Happy Homemakers Home Ec Club in Beaver Township.   She prided herself on this life of family and farm and friends, it pleased her, and she gave to it her considerable energy and intelligence.

Catherine is survived by:

Funeral Services will be held at 11 AM EDT Thursday, August 18, 2022 at Frain Mortuary in Winamac, IN with Rev. Edward Clark officiating.

Memorial Contributions may be made to the American Cancer Society, National Multiple Sclerosis Society, or Gideon’s International.

To send flowers to the family or plant a tree in memory of Catherine Hahn, please visit Tribute Store
Wednesday
17
August

Look inside to read what others have shared
Family and friends are coming together online to create a special keepsake. Every memory left on the online obituary will be automatically included in this book.
View Tribute Book
Share Your Memory of
Catherine
Upload Your Memory View All Memories
Be the first to upload a memory!
Share A Memory
Send Flowers
Plant a Tree