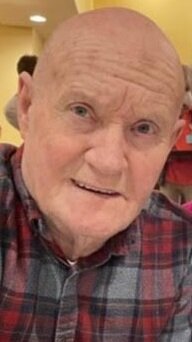 Please share a memory of Jay to include in a keepsake book for family and friends.
View Tribute Book

Jay Chamness, 78, of Winamac, IN passed away Tuesday, June 14, 2022 following a brave year-long battle with dementia.  He was born on December 15, 1943 in Winamac to the late Kenneth and Pauline [Passmore] Chamness.  Jay was a member of the Winamac Class of 1961.  On June 13, 1965, he married Helen Stump in Winamac.  In November of 1966, Jay was drafted into the US Army and served in Vietnam.  He was honorably discharged in November of 1968, having received a Purple Heart.  He was a lifetime member of the Winamac VFW Post #1728 and the Winamac American Legion Post #71.  Jay was a proud recipient of a Quilt of Valor in 2011.

Jay was a very hard worker, having worked many years at Tee-Pak, Wallace’s Chicken Farm, farming, and finally retired in 2005 from Pulaski White Rural Telephone Co-Op after 27 years of service.  He was well-known and locally famous for selling the best homegrown sweetcorn for nearly 50 years.  Dementia ended the era of Jay’s Sweetcorn before the 2021 season.

Jay’s favorite hobbies were growing sweetcorn and veggies, mushroom hunting, playing cards, fishing, and bowling.  He was a juror on Ford Pinto Trial in 1980.  Helen always said that Jay was her oldest kid because he was always outside playing dodgeball, kickball, and basketball with the neighborhood kids.   In winters, he enjoyed pulling Missie and Jeff (when they were kids) and their friends on sleds behind the three-wheeler.

Jay was a diehard Winamac Warriors fan and never missed a game of Bethany or Erika’s.  He was a proud supporter Katelin and Kyle’s bowling endeavors.  He loved the Indiana Hoosiers, NCAA Men’s Basketball, and NCAA Women’s Softball.   He always routed for the Hoosiers and anyone playing Purdue.

Jay was the sweetest fella, whose smiley, silly, and loving nature left lasting impressions on many.  He would want to thank his faithful corn people for the laughs and support over the years.  Whenever you eat sweetcorn and have it all over your face, think of Jay.

The family wishes to thank the staff of White Oak Health Campus in Monticello, IN for taking such good care of Jay the last several months of his life.

Funeral Services will be held at 2 PM EDT Saturday, June 18, 2022 at Frain Mortuary in Winamac, IN with Pastor Jeff Seger officiating.

Burial will take place at Winamac Cemetery (McKinley Addition) in Winamac, IN.   Military Graveside services will be conducted by the Winamac VFW and American Legion.

Memorial Contributions may be made to Memorial Swinging Bridge Project or Pulaski Animal Center.  Envelopes will be provided at the funeral home.

To send flowers to the family or plant a tree in memory of Jay Chamness, please visit Tribute Store
Saturday
18
June

Look inside to read what others have shared
Family and friends are coming together online to create a special keepsake. Every memory left on the online obituary will be automatically included in this book.
View Tribute Book
Share Your Memory of
Jay
Upload Your Memory View All Memories
Be the first to upload a memory!
Share A Memory
Send Flowers
Plant a Tree