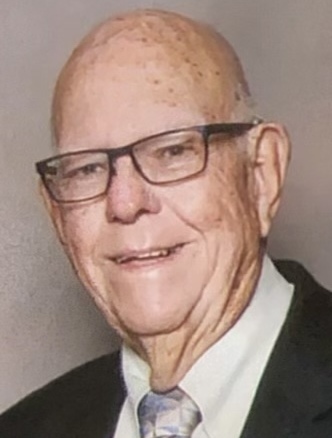 Please share a memory of Tom to include in a keepsake book for family and friends.
View Tribute Book

In addition to being a well-respected teacher at Winamac High School for 38 years, Tom was also a lifelong farmer.  He was fondly known to many as “Big Dog” and was famous for his fruit fly genetics project.  He and Barbara were avid supporters of the Winamac Music Boosters program and started the moon crater and lemon shakeup fundraiser; which continues today. His hobbies included cheering on the Purdue Boilermakers, playing board games, and fishing.  He often fished in Minnesota, with a lifelong goal of catching the elusive prize bass fish he called Walter.  He was a longtime member of Star City United Methodist Church as well as a supporter and fundraiser for Winamac’s July 4th fireworks.

In his youth, Tom was recognized with a Certificate of Heroism from the National Court of Honor of the Boy Scouts of America for having saved the lives of three mothers and their three children, who were drowning in the Tippecanoe River just behind his home on Riverside Drive.  He did this despite not knowing how to swim.

His greatest passion was his family.  In addition to raising their own children, Tom and Barbara opened their home to many others and loved them as their own.

Funeral Services will be held at 11 AM EST Thursday, November 18, 2021 at Star City United Methodist Church in Star City, IN with Pastor Tom Richards officiating.

Visitation will be from 3-8 PM EST Wednesday, November 17, 2021 at Frain Mortuary in Winamac, IN and one hour prior to services at the church Thursday.

Memorial Contributions may be made to Winamac Fireworks Fund or Star City United Methodist Church.

To send flowers to the family or plant a tree in memory of Tom Halleck, Sr., please visit Tribute Store
Wednesday
17
November

Look inside to read what others have shared
Family and friends are coming together online to create a special keepsake. Every memory left on the online obituary will be automatically included in this book.
View Tribute Book
Share Your Memory of
Tom
Upload Your Memory View All Memories
Be the first to upload a memory!
Share A Memory
Send Flowers
Plant a Tree