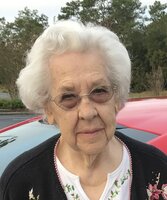 Dorothy Louise Lehman, 97, of Pulaski, IN passed away on Sunday, January 1, 2023 at Woodbridge Health Campus in Logansport, IN.  She was born April 18, 1925 on the family farm in Union Township near Kingsbury, IN to the late Arthur Jay and Minnie Louise [Wickham] Boardman.  She attended Union Township School until her family relocated to a farm in Pulaski, IN.  She graduated from Pulaski High School and attended a business college in South Bend, IN for a short time.  Dorothy married Ernest David “Dave” Lehman on August 16, 1947 in Nappanee, IN.  He passed away on September 4, 2013.

Dorothy was always a hard worker, whether it was on the farm as a kid or later as a telephone operator.  She was kind and generous, even from a young age.  Dorothy was a talented artist and enjoyed crocheting and knitting as well.  She will be dearly missed by all who knew and loved her.

Services will be held at 11 AM EST Friday, January 6, 2022 at Frain Mortuary in Winamac, IN with Rev. Nelda Seger officiating.

Private Burial will take place at Pro Cemetery in Winamac, IN.

Memorial Contributions may be made to Pro Cemetery.