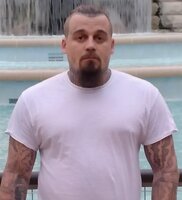 Bradley Alan Hartwell, 36, of Lee, IN (formerly Winamac, IN) was unexpectedly taken away from his family on Wednesday, September 21, 2022.  He was born on October 26, 1985 in Winamac to LeAnn Hartwell.  Brad attended Winamac High School and later in life, he earned a GED.  He enjoyed tinkering on cars and helping friends with projects of any kind.  Brad especially enjoyed spending time with his daughter and nieces – he was pretty much one of the kids himself!  He was outspoken with no filter and would give the shirt off of his back to help a friend.  Brad loved his pit bull, Odin, and his family who will miss him deeply.

LeAnn and Don Tunis, Winamac, IN Mom and Dad

4 Step Grandchildren and 1 on the way

Carson Rearick, DeMotte, IN Half Brother

Bradley’s wishes were to be cremated and for his family and friends to remember him as he was in life.

The family requests memorial contributions be made to LeAnn Tunis for the benefit of Bradley's daughter, Madisen. Envelopes are available at the funeral home. No flowers, please.