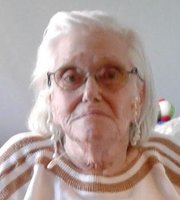 Alice G. Badger Lucas, 96, of Wilmington, NC passed away at 11:50 PM Monday, January 27, 2020 at Davis Community Nursing Home in Wilmington. She was born on the Badger family farm in rural Star City, IN on March 16, 1923 to the late Ray A. and Ruth B. Woolington Badger. Alice was a graduate of Star City High School. She took her first job working for Harold Stafeldt in the Pulaski County Courthouse. Alice was married to the late Harold “Doc” Swafford and they made their home in Winamac, IN for a short time before the couple left for a suburb of Detroit, MI where she worked at Chrysler for many years. They retired to Colorado Springs, CO, however, Alice continued working at the Penrose Catholic Hospital. Alice and Doc divorced and remained friends until the time of his death. While living in Colorado Springs, Alice met and married the late Russell Lucas with whom she shared many great memories. Alice was raised in the Star City United Methodist Church and was a woman of strong faith. She was a member of the Eastern Star (in Michigan) and enjoyed playing Pinochle with friends (in Colorado). Alice enjoyed traveling and was especially proud that she had visited all 50 states in her lifetime! She will be deeply missed by all who knew and loved her. She is survived by: Donna Badger Freeman, Sister Marilyn Adams Hafey, Niece Steven Freeman, Nephew Randall (Mary Lou) Freeman, Nephew Kelly Freeman Wirtz, Niece Valerie Freeman (Ray) Kokesh, Niece Jennifer Freeman (Tom) Dowell, Niece Several Great Nieces and Nephews Preceded in death by: Margaret Badger Adams, Sister Scott Freeman, Nephew James Badger, Half Brother Visitation will be from 12 Noon – 1 PM EST Friday, January 31, 2020 at Frain Mortuary in Winamac, IN. Funeral Services will be held at 1 PM EST Friday, January 31, 2020 at Frain Mortuary in Winamac, IN with Pastor Tom Richards officiating. Burial will take place at Star City West Cemetery in Star City, IN. Online Tributes may be offered at www.frainmortuary.com. Arrangements have been entrusted to Frain Mortuary in Winamac, IN.